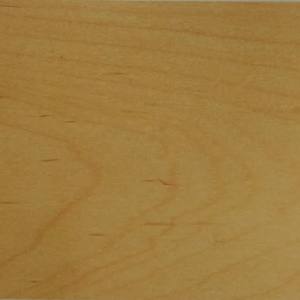 The stated weight (kg/m3) is measured with a moisture percentage of approx. 12%. Silver Maple is named after the leaves of the tree which have a slightly silvery bottom. It is very similar to Hard Maple in most respects. Although due to its widespread growth it may be more susceptible to regional colour variations. The sapwood ranges from almost white to light golden or reddish brown and the heartwood varies from light to dark reddish brown.

It is about 25% less hard than hard maple, has medium bending and crushing strenght and is low in stiffness and shock resistance. Unlike most other hardwood species, the sapwood is commonly used in the wood trade industry. Silver Maple is non-durable to perishable and amenable to insects. Furthermore, it is fairly easy to work with, even slightly easier than Hard Maple.