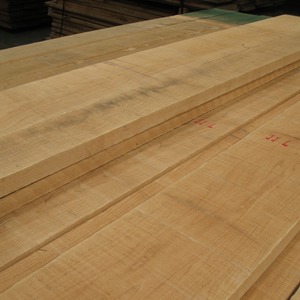 The stated weight (kg / m3) is measured with a moisture percentage of approx.12%. The color of the heartwood tends to vary from light to dark reddish brown. The amount of darker brown heartwood can vary significantly according to growing region. In contrast, its demarcated sapwood ranges from nearly white to an off-white cream color, somethimes with a reddish or golden hue. Unlike most other hardwood species, the sapwood is commonly used for the wood trade industry.

The wood is hard and heavy with good strength properties, in particular its high resistance to abrasion and wear. It also has good steam bending properties.

Hard maple dries slowly with a large shrinkage, so it could be susceptible to movement in performance. With care, it is fairly easy to work with, though slightly more difficult than Soft Maple.

Hard Maple is rated as slightly or non-resistant to heartwood decay and amenable to insect attacks.

* Birdseye Maple is a commonly used concept. Birdseye Maple could be descriped as wood with a lot of small knots, caused by small branches of the tree that grow in the summer and freeze in the winter. In addition, unilateral brown discoloration can occur.

*Compared to all other Maple species, Hard Maple is particularly the most strong and stiff one. Besides, it is known for its high density and hardness.

* Based on the tree itself, so not specifically on its wood, Hard Maple is commonly called Suger Maple derived from the Maple syrup the tree produces.