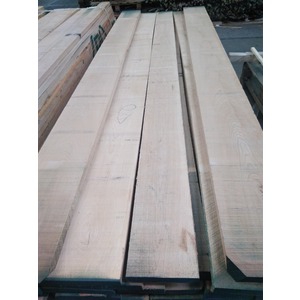 The stated weight (kg/m3) is measured with a moisture percentage of approximately 12%. The oaks are by far the largest species group growing in the Eastern hardwood forests.The botanical name is Quercus ssp., mainly Quercus Alba. White Oak is similar to European oak based on colour and appearance.

The sapwood of American white Oak is light coloured and the heartwood tends to vary from light to dark brown. The sapwood is not always clearly distinguishable from its heartwood. The wood is hard and heavy, with medium bending and crushing strength, low in stifness, but very good in steam bending. Aslo it has a straight grain with a medium to coarse texture. A beautifull figure could be found!

American white Oak is very durable, representing a very wide applicability and an exceptional value to woodworkers. The heartwood is resistant to decay, extremely resistant to preservative treatment and the sapwood moderately. Working with white Oak is fairly easy, but due to its high shrinkage, it could be susceptible to movement in performance.

Especially in higher qualities it is considerably cheaper compared to the European variant.