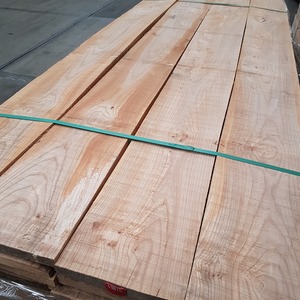 The Elm is ring-porous, which means in a previous stage of growth larger wood vessels occur with more spread than in a later stage of growth, often causing a difference in color and hardness between both. In addition, a clear distinction can be made between its sapwood and heartwood. Its heartwood is brown (sometimes with a greenish sheen) and its sapwood is yellowish white in color. The wood is also characterized as tough, strong and reasonably hard wood.

*In the past, to create more value European Elms were stored under water. This proces ensured the sapwood became about the same color as the heartwood.

We use cookies on our website. Some of them are essential for the operation of the site, while others help us to improve this site and the user experience (tracking cookies). You can decide for yourself whether you want to allow cookies or not. Please note that if you reject them, you may not be able to use all the functionalities of the site.